Design of new “Cerchio” viaduct on A25 motorway 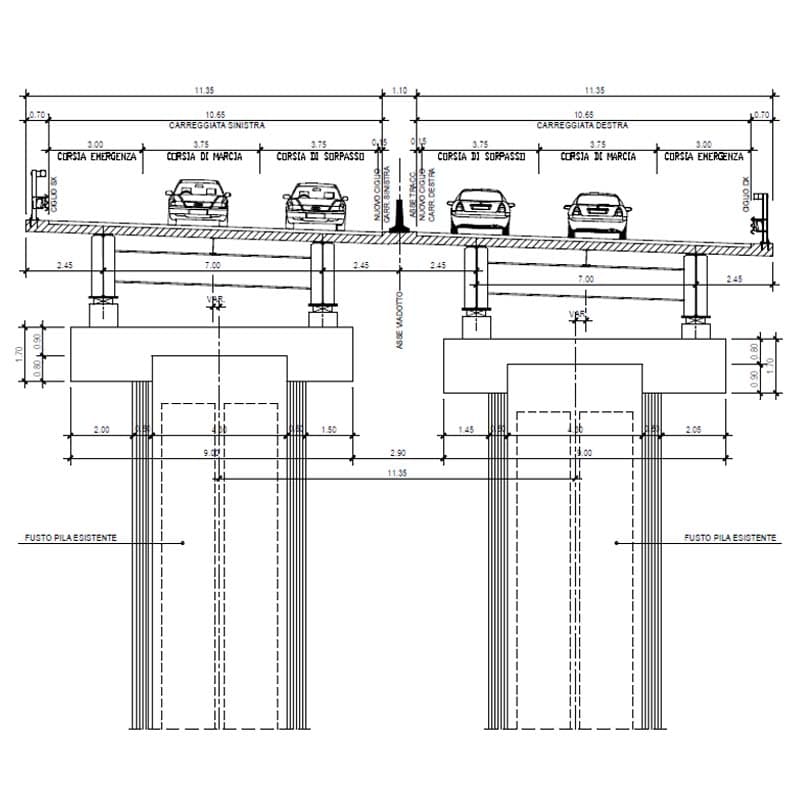 Deck up to 11 spans, 2 longitudinal beams, Transverse I beams, unique deck for the two carriegiaways. Drawings and calculation report for executive project.

Alhambra S.r.l. and INFRA Engineering s.r.l. (TOTO group) have developed the executive structural design of the deck of the new Cerchio viaduct, located on the A25 motorway, using the LUSAS software for structural analysis, and the PontiEC4 software to carry out the check cycle and optimize the steel- concrete composite structure. The work is part of the modernization of the motorway, and includes the replacement of the superstructure of the existing viaduct, consisting of two parallel prestressed deck, with a new continuous steel-concrete deck. The new structure host both carriageways and rest on the existing piers, for which a strenghetning intervention has been planned. The design of the superstructure was oriented to the definition of an efficient and light structure, respecting the traffic phasing envisaged by the customer, which required, during the works, the maintenance of the traffic flow on at least one of the two carriageways. The new steel-concrete deck therefore has a “modular” configuration, based on the adoption of two half decks, connected transversely only by the concrete slab. 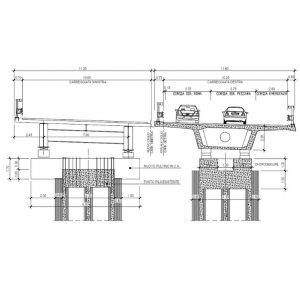 The new deck superstructure has a 11-span continuous beam layout, with similar spans scanning, with a maximum width of approximately 40 m. The main steel structure is made by two pairs of longitudinal beams, at a transversal distance of 7 m, and with a total height of 2 m. The transverse distance between the two assemblies (each structurally afferent to one of the two lanes) is approximately 11.90 m, allowing each pair of beams to be supported almost in line with the respective existing decks. Each pair of beams is connected transversely by a I steel transverse beam every 6 m. To complete the slab supports, a longitudinal spine beam is included, resting on the transverse beam in the middle of each of the two pairs of main beams. In the final configuration, the reinforced concrete slab has a total width of 23.80 m and a total thickness of 0.25 m. It carries the carriageways of both directions of travel, each with a width of 10.65 m. A single-line barrier installed on a reinforced concrete curb is arranged to separate the two carriageways. 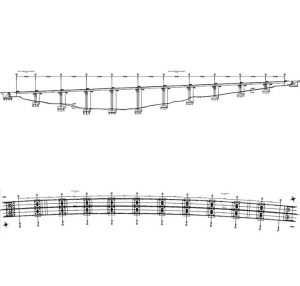 The intervention is designed in order to ensure, the practicability in two directions with sigle traffic lines along at least one of the two carriageways,. For this reason, the construction phasing provides for the initial dismantling of only one of the two existing runways, maintaining the flow of partialized traffic on the other carriageway, followed by the construction of a new half deck, where the traffic will be moved during the demolition of the remaining old carriageway.. At the end of the construction of the second half deck, the two structures are joined together at the middle of the central slab. The first part of the case study mainly highlights the characteristics of the LUSAS finite element software, the second part those of the PontiEC4 software.

MODELING AND ANALYSIS WITH LUSAS

The structural concept is extremely simple, being substantially based on the construction of a double grillage made up of beams and I transverse beams. The presence, however, of the slab as the only connecting element between the two structures forces to go into detail of its behavior, which can no longer be limited to the study of a continous beam on fixed supports, but must include the effects of flexibility of the main beams on which the slab rests,. Secondly, the effects of the postponed constraint applied at the junction between the slab of two carriegiaways were also considered. Through the use of Lusas, it was possible to create, in an extremely simple and fast way, F.E.models. with increasing complexity, depending on the objectives of the analysis.. For the calculation of the stresses and the check of the steel-concrete elements, a grillage model was prepared, based on the use of one-dimensional “beam” elements, also modeling the slab using equivalent one-dimensional elements. The geometric properties of the longitudinal beams are characterized by a specific attribute, called “bridge deck – girder with top slab”, able to combine, within each phase of analysis, the geometric and material properties of the steel beam, of the collaborating slab and of the relative reinforcements, in order to give to the solver the exact characteristics of the composite beam for each analysis phase. 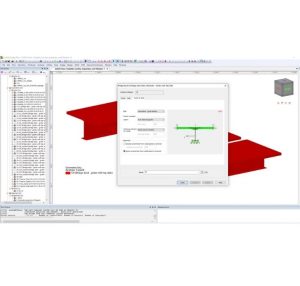 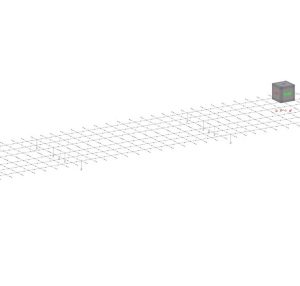 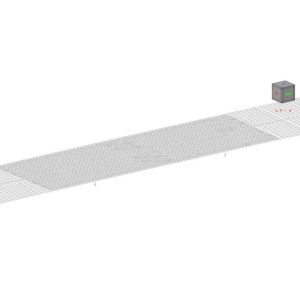 The analysis of the transition phase, with only one of the two decks present, was carried out by “activating” only the elements of the portion of the deck actually present.

The moment and shear values generated by the LUSAS analysis in the design combinations were exported to the PontiEC4 software to carry out the checks according to Eurocodes. The check cycle, which is carried out in correspondence with sections decided by the user, covers all the limit state. required by code of practice and includes:

The U.L.S. checks are carried out taking into account the actual overall classification of the section, depending on the of stresses in the various plates of the section. In addition to the numerical output on file, in which it is possible to follow each step of the carried out checks, the graphic output of PontiEC4, which includes graphs of stresses and of utilization ratio along the main beams , allows to have an immediate and exhaustive picture of the behavior of the entire structure, allowing to carry out of “targeted” optimizations of the structural thicknesses. Below are some examples of the diagrams obtained from the analysis of the Cerchio viaduct (the diagrams refer to the portion of the external girder between the piers n. 5 and n. 11). 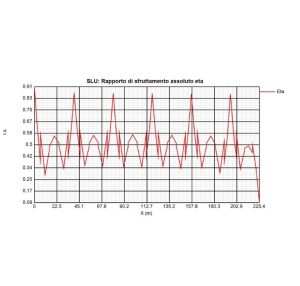 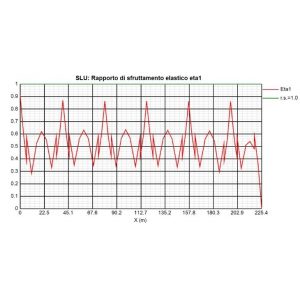 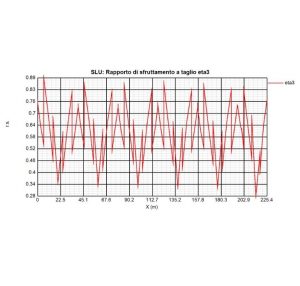 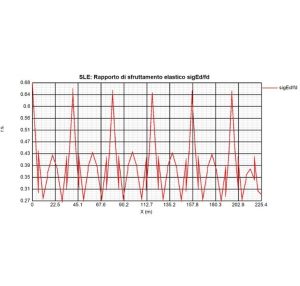 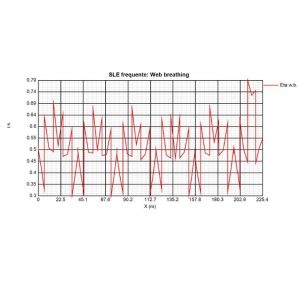 It is therefore possible to examine in detail the checks of a single section both interactively and by printing the verification report. 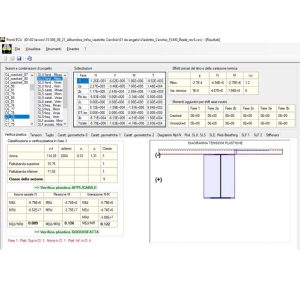 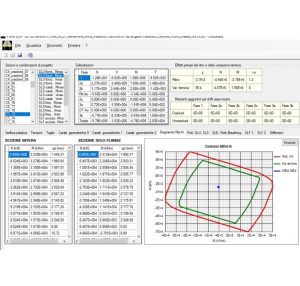 The program also allows you to carry out further additional U.L.S. and S.L.S. on the following components: – Vertical and horizontal stiffeners – Stiffeners at supports – – Slab-beam connection at the border of the deck The integration of the PontiEC4 software within Lusas allows a direct interface between the two systems in a bidirectional way, allowing both the export of the stresses from Lusas to PontiEC4, and the import of the geometric characteristics from PontiEC4 to Lusas, thus speeding up the development of the optimization process. Using other FE systems this interface is provided through Excel.

The effect of the vertical stiffness of the beams on the stresses in the slab, acting not only as a stress-distributing element, but also as a connecting element between the two semi-decks, has been fully evaluated by upgrading the original grillage model to a ribbed plate model. Through this model it was possible to appreciate the effect of the vertical stiffness of the longitudinal beams (maximum in the middle of the span) with respect to a hypothesis of fixed constraints on the beams, the diagram of the transverse bending stresses was then compared in the two hypotheses. 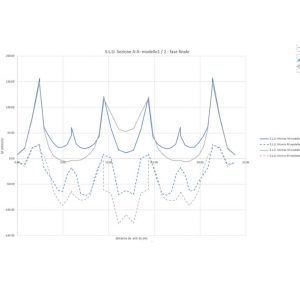 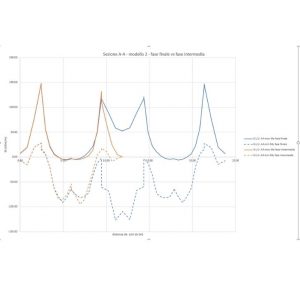 In this case, there is a not very significant influence of the construction phases, and would be possible to proceed with the dimensioning of the slab reinforcements directly starting from the final configuration.

“The flexibility of the LUSAS software has allowed the rapid processing of numerical models of increasing complexity, adequate each time for the specific purposes of each analysis, allowing speed, accuracy and simplicity of interpretation, and managementl of the output results. The PontiEC4 software has allowed the optimization of the various segments of steel beams, providing a clear, complete and exhaustive picture of the utilization ratio in the various Limit States considered by the code of practice and in all the phases.” 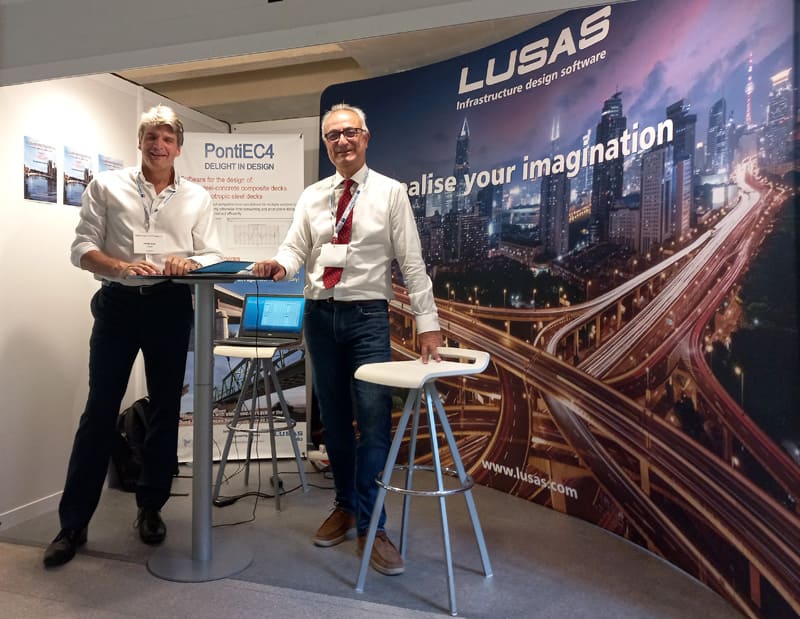 Carlo Margheriti has been present in september with Philip Icke of LUSAS, at Footbridge 2022 Conference in Madrid to expand network of partners distributing/reselling PontiEC4, 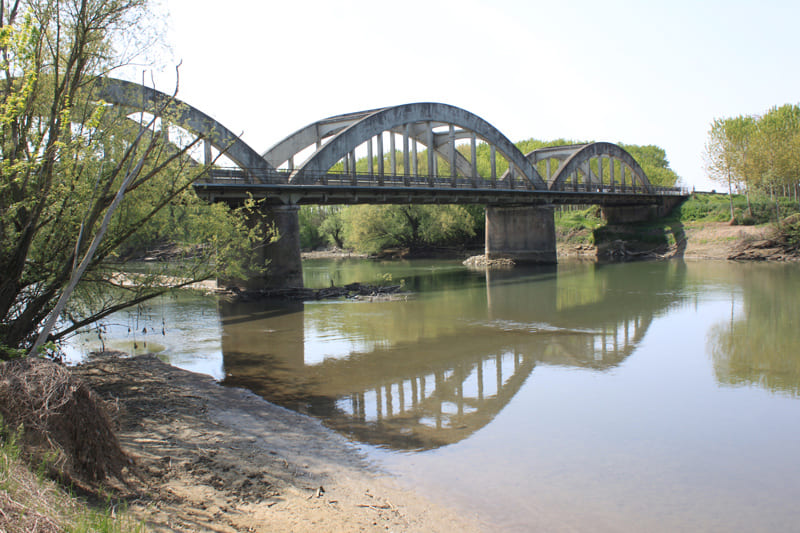 Alhambra srl and architect Farinelli from Ferrara, have won the bid of Centro Padane S.p.A. for the design of new bridges and the assessment of 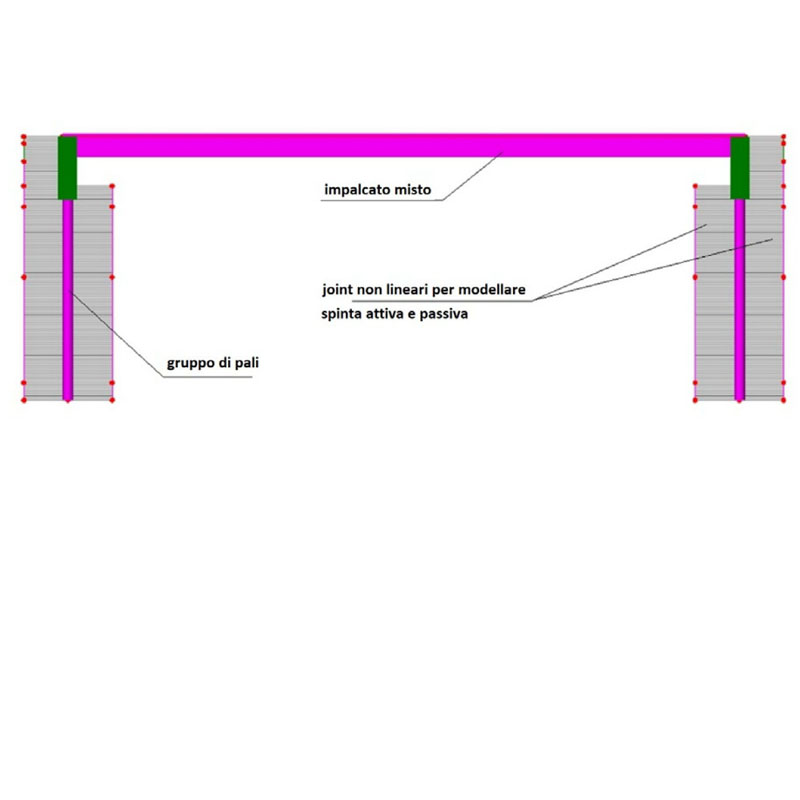 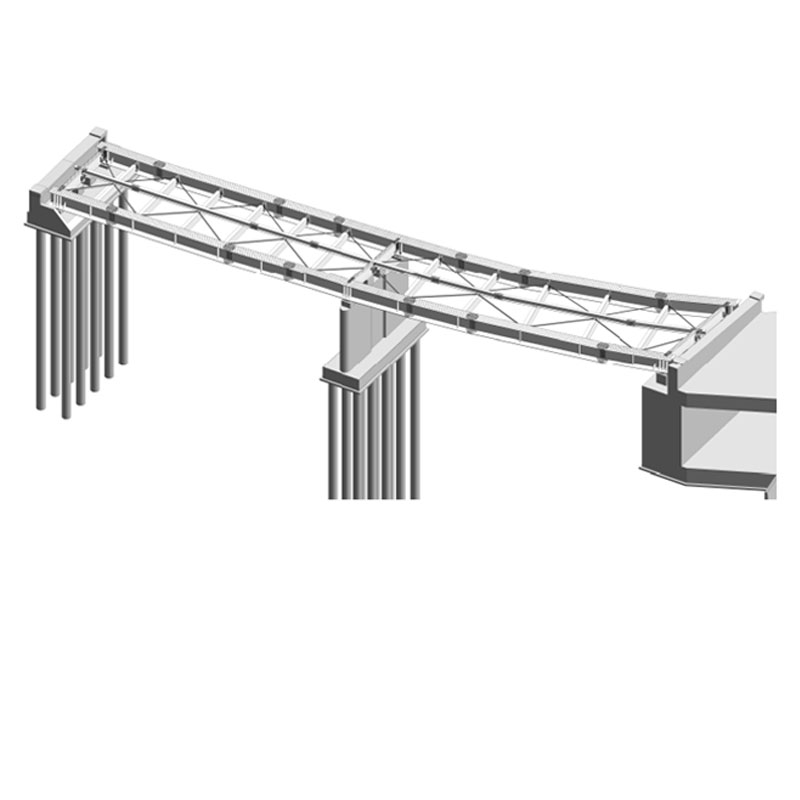